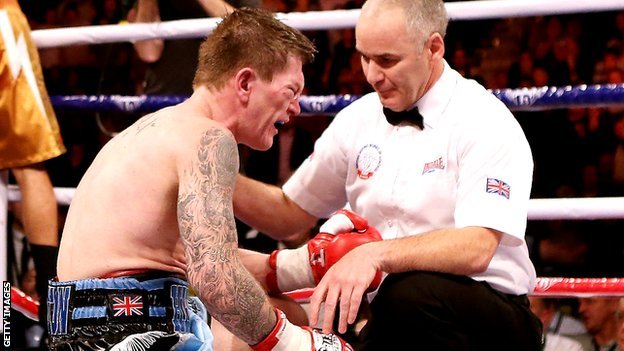 Ricky Hatton's return to the ring ended in a devastating defeat, the hometown hero knocked out by Vyacheslav Senchenko at the Manchester Arena.

Hatton started brightly but his Ukrainian opponent was in charge of the fight by the middle rounds and landing with some damaging right hands.

And a heavily marked Hatton, 34, was floored by a left to the kidney at the end of the ninth, from which he was unable to recover.

The defeat means Hatton, who had not fought since being knocked out by Manny Pacquiao in 2009, is unlikely to fight on.

"Ricky was a bit too aggressive. Will he look at himself in the mirror tomorrow morning and want to punch himself in the face? Nobody would have criticised him for taking a 'tune up' opponent. A year ago Senchenko was a world champion - you shouldn't walk back into those fights. I don't know what he was thinking when he took this fight."

"I am really heartbroken," he said.

"It was a good shot - I should have realised he was looking for that. I suppose that is what three and a half years out of the ring does.

"I am just gutted. I am not a failure. That is not how my career should end but I have to have a good think about it now."

The former two-weight world champion, who now has 45 wins and three defeats as a professional, said he was returning for redemption after three years of struggling with depression and substance abuse.

And 20,000 raucous fans at the Manchester Arena, plus a host of celebrities and boxing royalty seated ringside, were proof there is still no greater draw in British boxing than Hatton.

The pre-fight atmosphere, replete with choruses of "There's only one Ricky Hatton", was redolent of his most glorious nights at the venue, including his defeat of IBF light-welterweight champion Kostya Tszyu in 2005.

But there was to be no fairytale return for Hatton against a former world champion whom many had warned against him fighting.

Hatton admitted it would be a struggle to shackle his emotions on his comeback but he made a circumspect start.

He managed to get inside Senchenko's long jab to land with a couple of flurries but was already noticeably marked up after the first round.

Hatton backed Senchenko on to the ropes at the start of round two but when the Ukrainian hit back with a few hurtful right hands it was clear Hatton was in a fight.

The Manchester fighter went to work on the body in round three, landing with some punishing left hooks, but Senchenko landed with a juddering right cross towards the end of the round that drew gasps from the crowd.

This was only 35-year-old Vyacheslav Senchenko's fourth fight away from his home in Ukraine, but his impressive record now reads 22 KOs in 33 wins from 34 contests.

The tall, upright Senchenko continued to get through with jabs in round four but Hatton landed with two big right hands that appeared to rattle his opponent for the first time in the fight.

With Hatton coming forward in straight lines, Senchenko continued to pepper him with jabs in the fifth and probably did enough to win the round.

Senchenko stopped his rival in his tracks with two more ramrod overhand rights midway through the sixth, a round the visitor won by some distance.

Hatton opened a cut under Senchenko's left eye at the start of the seventh and both men looked extremely fatigued as they made their way to their corners at the end of the round, which was probably Senchenko's again.

Hatton's legs appeared to sag under the weight of another right hand at the start of the eighth and there was an increasingly desperate air about the Englishman's work as the fight entered its final rounds.

With both eyes heavily swollen and his left hook becoming wilder and wilder, Hatton shipped some heavy punishment in the ninth before Senchenko delivered the coup de grace, a devastating left to the kidney.

For a moment it looked like Hatton would rise from his knee but he was eventually counted out by referee Victor Loughlin, to the disbelief of the crowd.

Hatton required treatment in the ring before dissolving into tears, his hopes and dreams, and those of his fanatical supporters, having turned into a nightmare.

Hatton had hoped to fight Paulie Malignaggi, whom he beat in 2008 and who won the WBA welterweight crown from Senchenko earlier this year.

Malignaggi had already said he would take a rematch but that bout, as well as potential bouts against domestic rivals Amir Khan and Kell Brook, is now highly unlikely to happen.

Hatton, who has learned what many other boxers have learned before him, namely that coming back is hard to do, will probably now concentrate on his training and promoting commitments.