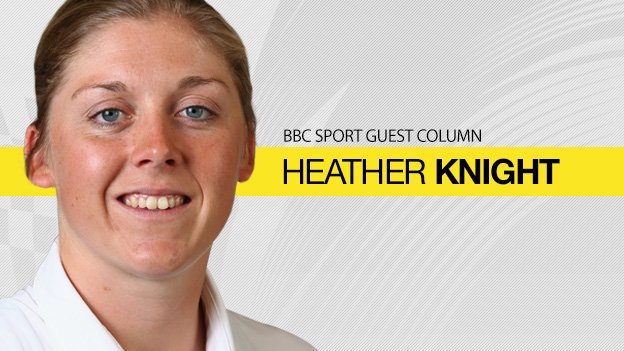 Heather Knight column: 'I had to keep the captaincy under my hat'

Heather Knight was named as England's new captain on 3 June, following the retirement of Charlotte Edwards. Here, she reflects on her appointment as skipper - and the start of a new era for the team.

It's fair to say quite a lot has changed in the world of England women's cricket since I sat writing my last column a few months ago.

With the retirement of both Lottie (Charlotte Edwards) and Lyd (Lydia Greenway) from the international game, we're entering a new chapter for the team, beginning with our home series against Pakistan this summer.

Any words I write wouldn't do justice to what both Lottie and Lyd have achieved for the women's game in this country.

It's been a pleasure to share a cricket field with them for the entirety of my England career, and to share the highs and the lows that international cricket brings, as well as calling them mates off the pitch too.

Keeping the captaincy under wraps

I'd known about taking over the captaincy for a few weeks before it was announced officially at Lord's, so my poker face has been tested to the max recently, having to keep it under my hat! I only told a few people close to me including my parents and it was great sharing the news with them, as they've been a massive part of my journey to get here.

Despite the changes, as a squad we're totally looking forward to what we have coming up in the next few weeks. I don't think I've ever seen the girls so focused at training as I have in the last month, and credit to them all, they've been brilliant.

Dawn of a new era

I'm obviously very proud and hugely excited to lead this group of girls into the next chapter alongside Robbo (coach Mark Robinson) and Anya (Shrubsole, the new vice-captain).

Yes, there have been some changes, and yes, there will be some challenges along the way, but there's a real excitement around the team about where we could go moving forward. There's some serious talent in this squad and I have no doubt we'll see that coming to the fore in the forthcoming one-day international and Twenty20 international series against Pakistan.

We kick off our new chapter at Leicester's Grace Road on Monday for our first ODI against Pakistan, and it will be a proud moment to lead the team onto the pitch for the first time. Follow us on Test Match Special to see how we get on!

Knight and Shrubsole go back to school