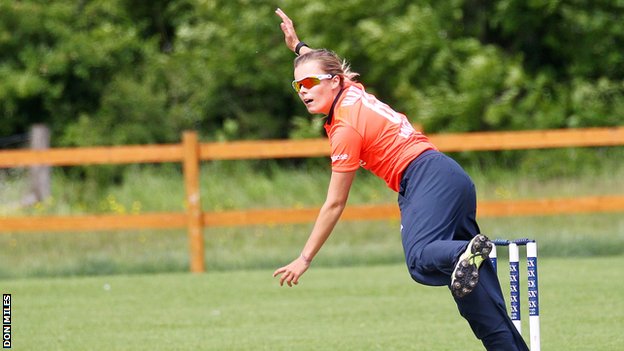 Hartley, 22, has been selected after a series of impressive displays for the England academy side

England have called up uncapped Middlesex left-arm spinner Alex Hartley for the first two games of their one-day international series with Pakistan.

Spinner Rebecca Grundy and seamer Natasha Farrant, who were both in England's squad for the recent Women's World Twenty20, are not included.

The three-match series is Heather Knight's first as captain, following the retirement of Charlotte Edwards.

The first game takes place on Monday at Leicester (14:00 BST).

"Alex has worked incredibly hard at her game over the last 12-18 months, and I have been very impressed with her skill as a left-arm spinner in the time that I have been working with her," said coach Mark Robinson.

As well as Grundy and Farrant, the other names missing from the World T20 squad are Edwards and Lydia Greenway, who have both retired from internationals, and Sarah Taylor who is taking a break from cricket to deal with anxiety issues.

In Taylor's absence, Amy Jones will keep wicket, with batter Lauren Winfield - who was left out of the World T20 - as back-up keeper.

Fellow batter Fran Wilson, added to the list of centrally contracted players last year, returns to the squad having played her last international in 2011, while uncontracted seamer Beth Langston is ruled out with an ankle injury.

Robinson added: "Monday is going to be a very proud day for our new captain and vice-captain, Heather Knight and Anya Shrubsole.

"Pakistan cannot be underestimated. They showed everyone during the World Twenty20 how dangerous they can be, when they beat the hosts India on their own patch."