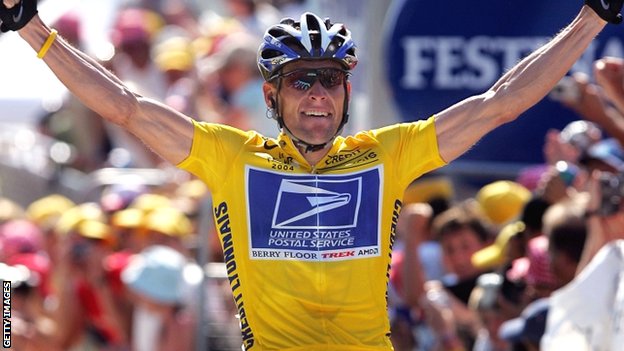 Lance Armstrong should not "ambush" this year's Tour de France by taking part in a charity ride, says the director-general of the World Anti-Doping Agency, David Howman.

Ex-footballer Geoff Thomas has asked Armstrong to join a ride along the race route, despite his lifetime doping ban.

"It's disappointing Armstrong should take centre stage in an event which he cheated in so often," Howman said.

No regrets over Armstrong - Thomas

"He's welcome to try to save lives. I don't think he should be ambush marketing an event which is far superior to what he is doing."

The charity ride will follow the same route as the Tour, a day ahead of the race.

Armstrong was stripped of his record seven Tour titles and banned from most organised sport for life by the US Anti-Doping Agency (Usada) in 2012.

He later admitted on US television that he had used performance-enhancing drugs during all of his Tour victories.

Thomas was diagnosed with leukaemia in 2003, a year after he retired from a 20-year football career, and visited Armstrong's home in Texas to persuade the 43-year-old to take part.

Cookson said taking part would be "completely disrespectful" to the current riders, cycling authorities and the Tour de France.

Howman also said he was "cynical" about reports  that Armstrong had met Travis Tygart, chief executive of US anti-doping agency Usada, in an attempt to reduce his ban.

"Armstrong was banned in 2012 and we are now in 2015," said Howman. "If he had information that he felt was going to lead to a reduction on his ban, surely he would have provided it by now?

"What's stimulating him to come forward now? I don't know. What he has said to the Cycling Independent Reform Commission was insufficient to lead to a reduction.