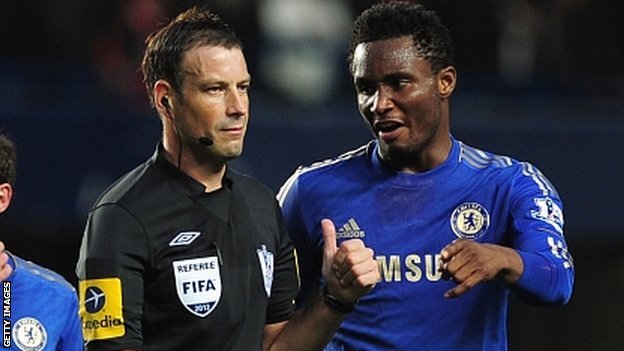 The Blues allege the referee used an offensive racial term in their 3-2 defeat by Manchester United on Sunday.

The club added there was insufficient evidence to suggest Juan Mata had also been verbally abused by the official.

29 Oct: Offered full support of referees' union, but is stood down for next round of matches. FA starts investigation, Met Police receive complaint.

Clattenburg maintains his innocence and neither of his assistants or the fourth official support Chelsea's allegations.

Chelsea's formal complaint is the latest stage in a process which began after Sunday's match.

Following the game the club complained to the match delegate, while on Tuesday the Metropolitan Police began an investigation after receiving a complaint from a source outside the game.

Newcastle-based Clattenburg, 37, who has been stood down for this weekend's round of matches, took charge of his first Football League game aged only 25 in 2000.

He was promoted to the Premier League's Select Group four years later and the Fifa list in 2006.

There's a huge amount at stake. For the referee - who I understand is very angry and upset about all this and whose career is on the line - and for the club as well, who were criticised so heavily for the way they handled the John Terry saga.

Chelsea have got to be careful in how they proceed and that's why they've conducted this independent internal legal inquiry.

I understand that Clattenburg, had Chelsea decided not to proceed, wanted this to be heard and dealt with fully in order to clear his name.

Clattenburg, assistants Michael McDonough and Simon Long, and fourth official Mike Jones were reportedly stunned when they were confronted by an angry Mikel in the referees' room after the match at Stamford Bridge.

Clattenburg's colleagues, who were connected to him by microphones throughout the game, were all said to have denied hearing him abuse either player.

A Chelsea statement read: "This [formal complaint] is a result of a thorough investigation carried out by the club, and led by outside legal counsel, of all information available to us including interviews with a number of players and staff.

"Following Sunday's Premier League game against Manchester United, club board members were quickly made aware, upon entering the home dressing room after the final whistle, that there were allegations of inappropriate language directed at Chelsea players by Mr Clattenburg during the game.

"Board members began establishing the details of the allegations, speaking to all relevant players and staff. After those initial interviews it was clear that the matter had to be reported.

"The correct protocol for doing so was to report the incidents to the match delegate, and the club took immediate steps to inform him as soon as he was available. It was not a decision the club took lightly."