Football
[an error occurred while processing this directive]

Aguero was offside when he headed in Aleksandar Kolarov's free-kick.

City keeper Joe Hart saved from Georginio Wijnaldum late on to ensure Newcastle remain in the bottom three, just behind Sunderland and Norwich.

The England keeper's block denied the home side a winner which would have lifted them out of the relegation places.

Newcastle are now one point and a place behind Sunderland and two adrift of the Canaries, who lie just outside the drop zone.

Is Newcastle fight too late?

BBC Radio 5 live summariser Alan Shearer believes Newcastle would have been assured of survival had they appointed manager Rafael Benitez earlier and the Spaniard has certainly added some steel and discipline to the Magpies.

United had not beaten City in their last 18 league games, losing the last 12, although they did at least go into Tuesday's match of the back of a 3-0 win over Swansea on Saturday.

The home fans might have feared the worst when Aguero's goal was allowed to stand but their team responded with the type of character and commitment they have been lacking for much of the campaign.

Andros Townsend's work-rate and desire on the right set the example to his team-mates and the ovation he received when substituted showed how the Magpies faithful appreciated his efforts.

Centre-back Jamaal Lascelles, who recently criticised the "heart" of the Newcastle players, also stood out with his commanding performance.

Whether Benitez can now maintain his side's improvement and steer them to safety in their final four games - which are against Liverpool, Crystal Palace, Aston Villa and Tottenham - remains to be seen. 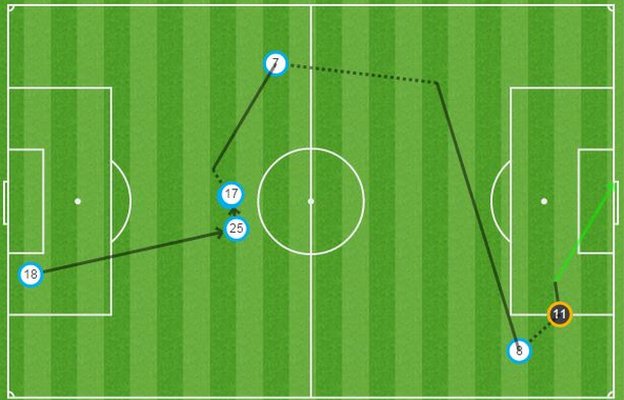 Did City have one eye on the Champions League semi-final?

Benitez was hoping the visitors would be distracted by the first leg of their Champions League tie against Real Madrid next Tuesday.

However, City have yet to secure a top-four spot to book a place in Europe's top competition next season and, while they were not at their best, they certainly applied plenty of pressure.

Aguero's goal made him the second fastest player to reach 100 goals in the Premier League, behind Shearer, and City's failure to build on that had plenty to do with the resolve of Newcastle.

The Argentine's goal was allowed to stand but such an error could be changed at 2018 World Cup in Russia with Fifa president Gianni Infantino hoping video referees will help officials with "game-changing" decisions at the tournament. 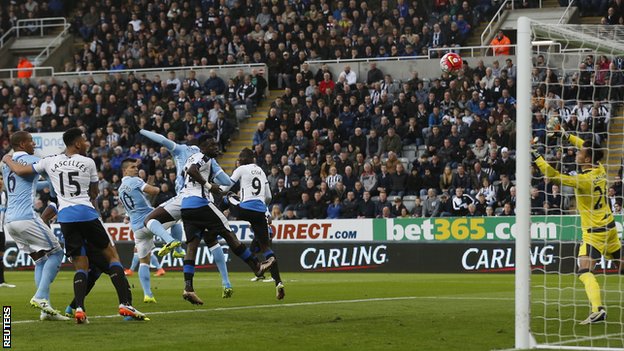 Kompany rusty on his return

The visitors had the boost of having centre-back Vincent Kompany back after six games out with a calf injury, but he looked rusty on his return.

The Belgium international gave the ball away to Sissoko before Hart came to his rescue by rushing out to clear, while Kompany was also booked for a late challenge on the Newcastle midfielder.

"The hardest part of coming back from injury is getting back to the level of the Premier League," said Kompany. "The more games you play the better you will feel. Overall, it was a positive day."

Winger Raheem Sterling came on as a substitute to make his comeback after five games but could not inspire his side to a winner as they remain third.

Man of the match - Jamaal Lascelles 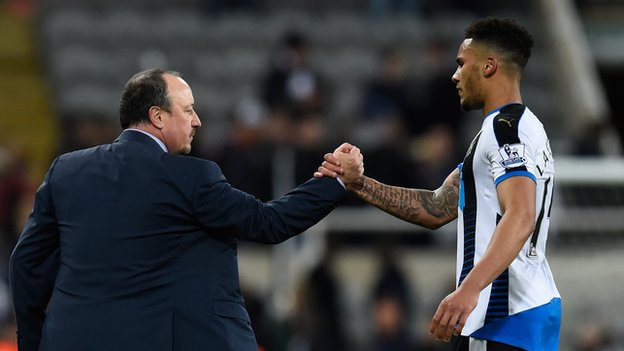 'We have to keep believing'

Newcastle manager Rafael Benitez: "The fans appreciate the effort of the players. Everybody is trying to do everything to stay up.

"Hopefully we have momentum, but we cannot have influence on other teams' games. We have to keep believing and hopefully win the next game.

Manchester City boss Manuel Pellegrini: "I am happy. We started winning the game but we could not have the control after that. We knew that it was very tough.

"The officials have nothing to do with the result. I didn't see the team with the energy from Saturday, but we play after three days at the end of the season and it is not easy for the team to recover."

Former Newcastle striker Alan Shearer: "The one thing that stood out for me was the atmosphere. The crowd's reaction towards the players where they gave them a round of applause. There's a little bit of hope now when there wasn't a few weeks ago."

The stats you need to know