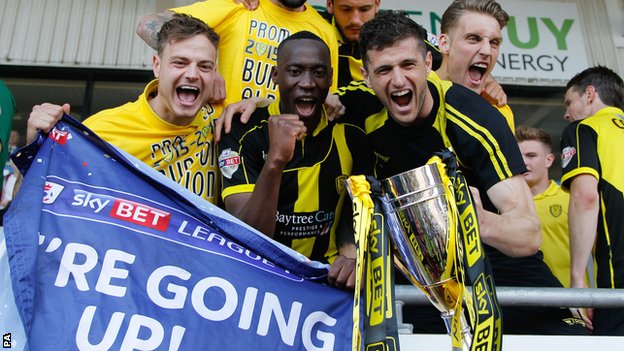 BBC Sport outlines the battles for promotion and relegation - and all the European qualifiers - in England and Scotland.

Leicester City were crowned Premier League champions on 2 May without kicking a ball after Tottenham failed to beat Chelsea. They will be joined in the Champions League group stage by runners-up Arsenal and third-placed Tottenham. Meanwhile, Manchester City finished fourth, meaning they will be in the Champions League play-off round. The Europa League place City earned from winning the Capital One Cup transfers to the league.

There are no longer any Fair Play places allocated to the Europa League.

Aston Villa's relegation to the Championship was confirmed on 16 April by a 1-0 defeat at Manchester United. They were joined by Newcastle United and Norwich City on 11 May after fellow strugglers Sunderland's 3-0 win over Everton. 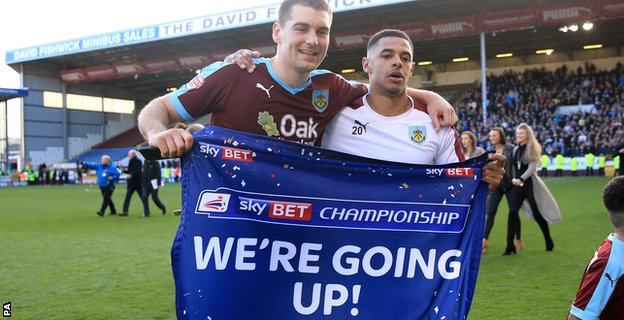 Burnley were joined by Middlesbrough, who edged out Brighton

Burnley secured promotion on 2 May after beating QPR and clinched the title five days later by winning 3-0 at relegated Charlton. Also on 7 May, Middlesbrough grabbed the second automatic place after drawing 1-1 with Brighton while Hull City beat Sheffield Wednesday 1-0 in the play-off final on 28 May to join them.

Bolton Wanderers were relegated to League One on 9 April after a 4-1 defeat at Derby. Charlton Athletic went down on 19 April as they drew 0-0 at Bolton, and Milton Keynes Dons filled the third relegation place as they lost 4-1 to Brentford on 23 April.

Wigan Athletic were promoted to the second tier after their 4-0 win at Blackpool on 30 April, while Burton Albion joined them after a goalless draw at Doncaster on the final day of the season. Barnsley beat Millwall 3-1 in the play-off final on 29 May.

Crewe Alexandra were the first team relegated to League Two, falling on 9 April after a 3-0 defeat at Port Vale. Colchester United went down on 23 April as they lost 3-0 to Burton, Doncaster Rovers' relegation was confirmed by that draw with Burton while Blackpool joined them on the final day after losing 5-1 at Peterborough.

Northampton were the first team in England to clinch promotion

Northampton Town were promoted on 9 April after drawing 2-2 with Bristol Rovers and were crowned champions after a goalless draw at Exeter on 16 April. The other automatic promotion places went to Oxford United, who beat Wycombe 3-0 on 7 May, and Bristol Rovers who saw off Dagenham & Redbridge 2-1 on the same day. AFC Wimbledon beat Plymouth 2-0 in the play-off final for the last promotion spot on 30 May.

Dagenham & Redbridge were relegated to the National League on 16 April after losing 3-2 at Leyton Orient - ending their nine-year stay in the Football League. York City joined them as they lost 3-0 at Accrington on 23 April.

Champions Cheltenham Town, who clinched an instant return to the Football League by beating Halifax 2-0 on 16 April, are promoted to League Two, as are Grimsby Town who beat Forest Green Rovers 3-1 in the play-off final.

Kidderminster Harriers and Welling United were both relegated on 16 April when they failed to beat Barrow and Chester respectively. Altrincham's loss at Braintree and Halifax's draw with Macclesfield on the final day meant those two teams also dropped out of the division.

Celtic clinched the title with two games to spare

Celtic clinched the title, and a place in the Champions League second qualifying round, on 8 May with a 3-2 win over runners-up Aberdeen, who will enter the Europa League in the first qualifying round alongside third-placed Hearts.

Dundee United were relegated to the Scottish Championship after losing to rivals Dundee on 2 May. However, 11th-placed Kilmarnock avoided the drop after beating Championship side Falkirk 4-1 on aggregate in the play-off final.

Rangers were promoted to the Premiership as champions after they beat Dumbarton on 5 April. However, they will be the only side promoted after Falkirk lost 4-1 on aggregate to Premiership side Kilmarnock in the play-off final.

Alloa Athletic's relegation to League One was confirmed when they drew 0-0 at Livingston on 2 April. Ninth-placed Livingston joined them on 7 May after losing an epic play-off semi-final 8-6 on aggregate to League One side Stranraer.

Dunfermline Athletic were promoted to the Championship after clinching the title on 26 March by beating Brechin City 3-1, and they will be joined by Ayr United who beat Stranraer on penalties in the play-off final.

East Fife are promoted to League One as champions, winning the title on 16 April with a 0-0 draw at Clyde. Queen's Park will join them after beating Clyde 3-2 on aggregate in the play-off final.

Bottom side East Stirlingshire have been relegated to the Lowland League after losing a two-legged play-off 2-1 to Edinburgh City, who replace them in League Two.