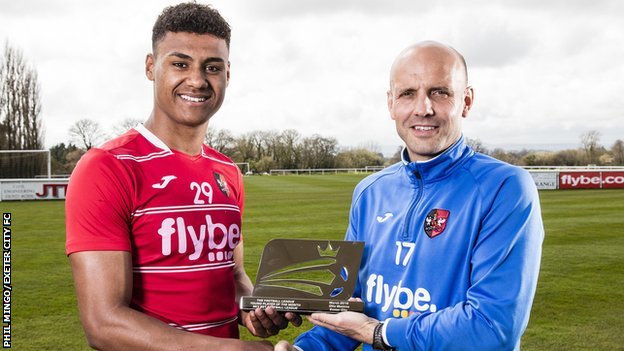 Exeter City's Ollie Watkins: Scoring goals for the club that once turned him away

No matter how good a footballer may turn out to be, there is one thing they will almost certainly have experienced at some stage - rejection.

For many youngsters the dreaded snub can be enough to put them off the game for life but, after being turned down by Exeter City at the tender age of nine, Ollie Watkins tried his luck again at the same club, and was this time accepted.

Now 20, the forward is taking League Two by storm and has won the Football League's Young Player of the Month award for March, proving it is how you get up from a fall that really counts.

"When you're younger it's not as much of a big deal," he told BBC Sport. "I got into the Exeter academy at under-11s - I came for my first trial when I was nine and didn't get in.

"If it came when I was 16 I'd have been very disappointed, but luckily I had that time to improve and become a better player." 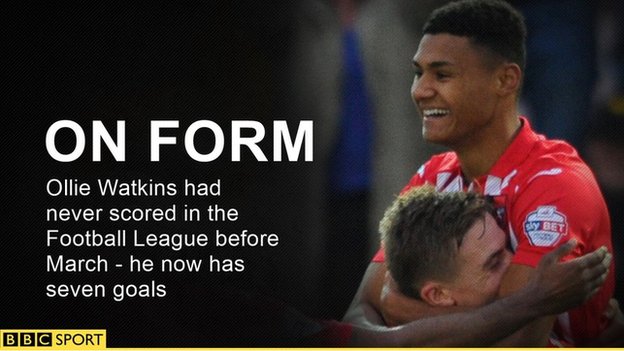 Chelsea, Paris St-Germain and Bournemouth - some of the teams that winners of this season's monthly Football League award have represented before finding their feet in the professional ranks.

For Watkins, it has been a more humble rise to the first team at Exeter, including a loan spell at National League South side Weston-super-Mare last season.

"That played a big factor I think, playing 25 games for them," he added. "Playing men's football was very helpful for me and scoring goals there was a bonus as well - it was just expressing yourself."

Would the Newton Abbot-born striker have traded his football upbringing for something more glamorous?

"I've come up through Exeter, I've been given a chance like some other young players and I'm very grateful of that," said Watkins.

"I would say it is easier, because they (bigger clubs) bring in more experienced players for a lot bigger money, whereas teams like us, we don't necessarily have the money like Chelsea."

Scoring the winning goal against your fiercest rivals - it is what players dream of as kids, which was not long ago for Watkins.

But how about scoring twice against them in the last 10 minutes, including a stoppage-time winner from more than 25 yards, all in front of your own fans?

It may sound like a Hollywood script, but it is exactly what the attacking talent pulled off as Exeter came from behind to beat Plymouth on 2 April.

"That's indescribable really, it's definitely the highlight of my career at the moment and I'd hope for many more goals like that," he said.

"I have a lot of people that believe in me and I believe in myself - it's not just a one-off.

"I haven't come in, scored a couple of goals and that's it - hopefully I can keep these numbers up."

Exeter were 14th in League Two before Watkins' purple patch but now find themselves on the brink of the play-off places.

Scoring seven goals in an eight-game spell has helped him make a name for himself as an exciting talent, but what position does he actually play in?

"I'm still trying to find it really," he admitted. "In the reserves and through the youth team I was playing on the wing, but now I find myself in the number 10 role, which seems to be paying off lately."

That is putting it lightly - the club have even starting selling Ollie Watkins merchandise,  adorning the phrase "he's one of our own".

Despite the meteoric rise, his Exeter team-mates are ensuring the youngster's feet remain grounded.

"Apparently there's this rule for away games that the youngest lad on the coach makes the coffees, so that's me - always me."

The title of Exeter's best youngster goes to defender Jordan Moore-Taylor, according to his boss

Exeter are a club with an ever-growing reputation for producing players and selling them on for big profits.

"He's working incredibly hard, he's defending for the team - those things are the attributes which get you in the team in the first place and will keep you there," said Watkins' manager Paul Tisdale.

"He's scoring goals and he's come into a team which is in good form - he's been part of it, he's contributed to it, but he's not the only one."

Tisdale is correct not to give Watkins all the credit for their late push for the top seven, but surely the forward is Exeter's brightest prospect? No, says the boss.

"I'm not surprised people are interested in him, he's proved to be probably our second best young player at the moment behind Jordan Moore-Taylor.

"Jordan's done it over 100 games for us now - Ollie's pretty new to it and he's shown a lot of good attributes other than his talent."