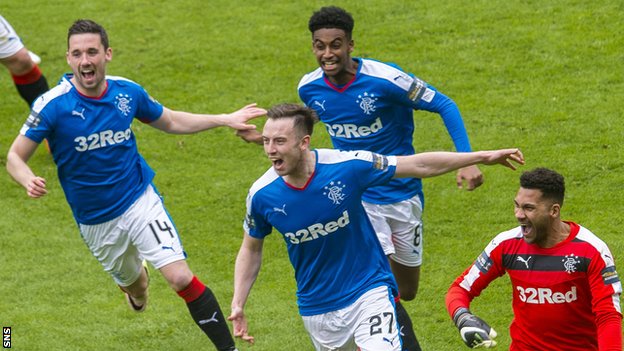 King stressed that, if Rangers are going to challenge for the Premiership, it's important they strengthen the squad and get "a few more players in".

He also admitted that achieving European football next season would have an effect on their recruitment.

"We still have a plan to improve on the team during the summer," King told the Rangers website.

"The squad was very light," said King. "I think the players that we had on the park were fantastic, but next year, if we're going to challenge for the title, it is important that we still strengthen the squad and get a few more players in.

"The target for the season was always to win the Championship. I think we did that quite comfortably."

Mark Warburton's side will face Hibernian on Wednesday evening in their final Championship encounter of the season before meeting again in the cup final on 21 May.

Warburton has led Rangers to promotion this season

"If we're fortunate enough to win the cup final - it will still be a tough game against Hibs - it would get us into Europe and that's a year ahead," King explained.

"Our original plan was to win the Championship this year, improve the squad and challenge for the Premier League next year and hopefully be in Europe the following year.

"So it would be a real, real bonus if we could accelerate the European part of it by a season. But they've still got to win the cup final to do that.

"I had a chat to Mark in the dressing-room and I just said, 'let's see how the final goes and we might need to kind of plan differently some of the player acquisitions in the close season'."

King, who led a successful boardroom takeover last year, described the semi-final win over Celtic on penalties as "absolutely astonishing".

"When we were up there after the final whistle and I saw grown men cry, there were tears rolling down the faces of every single board member," he added.

"I think every single director, including me, was in tears and, as we looked at each other and hugged each other, everyone was crying.

"All the people who have gone through the last year, the regime change and everything we have done, this is what it is about.

"We have been doing it for this and to see the reaction of the fans it was absolutely phenomenal for everybody."

The stories on the back pages of today's Scottish newspapers