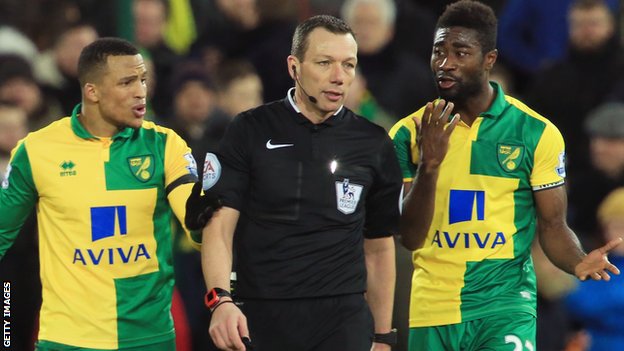 The fallout over referee Jon Moss' performance in Leicester's 2-2 draw against West Ham took attention away from another officiating talking point.

Instead he will be in the middle of Manchester City's trip to Newcastle on Tuesday night.

But how does a referee's home town, or who they support, affect which games they are actually allowed to officiate?

Do referees have to say who they support?

Yes. And referees will not get appointed to the clubs they support.

"At the beginning of every season the referees' background information is audited," said Keith Hackett, the former head of Professional Game Match Officials Limited (PGMOL), the organisation that makes refereeing appointments for Premier League games.

"They complete a form that includes who they support, the history of if they've played the game and with the addresses where they are residing.

"That gives you a picture that comes into use when you're appointing. It's about ensuring, for example, you wouldn't appoint a Sheffield-based ref for a Sheffield team."

BBC Sport has not seen an official record of referee's allegiances, one of several factors considered when officials are selected for matches.

Former Premier League referee Mark Halsey added: "I was never able to referee Bolton because I lived there. If you lived in Leeds, you weren't going to referee Leeds United. "

What is the official line?

PGMOL says the process behind referee selection is all about avoiding "unnecessary extra external pressure and scrutiny on referees" in what is an "already a high pressure and demanding job".

It also says that where a referee lives is not a factor when referee appointments are considered.

So what does happen when you referee your team?

Halsey, a QPR fan, said he refereed his own team twice, before rules over announcing your allegiance came in.

"I lived 35 miles away from Loftus Road," he said.

"I refereed one win and one loss and I thought 'I can't do this again'. I never told them initially because it was back in the 1990s and things like that were only just starting to happen.

"I had to declare it because I felt like celebrating when they won. But once you've crossed the white line you're the ref and you always remained professional."

Both Hackett and Halsey argue there are inconsistencies.

Halsey has questioned why Friend was removed from refereeing a game involving Leicester's title rivals, while Michael Oliver, a Newcastle fan, was allowed to officiate in a game involving the Magpies' fellow relegation candidates Norwich City, when they lost to Crystal Palace last week.

"I just think they're making a rod for their own back," said Halsey.

And Hackett has pointed towards inconsistencies around refereeing appointments when it comes to geography.

Mike Dean, a Tranmere fan, was removed from refereeing the 2006 FA Cup final between Liverpool and West Ham because he lived in Wirral, which is part of Merseyside.

Up until that point he had officiated one Liverpool game and two Everton games, but has not overseen either side since, despite moving to north Wales.

Meanwhile, Anthony Taylor, an Altrincham fan who lives in the Greater Manchester borough of Trafford, is allowed to officiate matches involving Manchester City and Manchester United.

"If you're an Everton fan coming up to the FA Cup semi-final against Manchester United and you look at where Anthony Taylor lives, you suddenly go 'wow'," said Hackett.

The PGMOL says it makes appointments on a "case by case basis".

Halsey and Hackett said they were not questioning the integrity of any referee, but questioned the consistency of the appointment process.

What do the managers say?

Arsenal boss Arsene Wenger criticised the decision to remove Friend from Tottenham's game against Stoke, after pressure from Spurs fans on social media.

"If you go that way, it becomes a nightmare every week to choose a referee for every single game. A dangerous precedent," he said.

"The solution is you don't look where they come from, who they support, and you put the best referees into the games."

Speaking before Monday's 4-0 defeat by Spurs, Potters boss Mark Hughes added: "Maybe the professional body that is in charge of referees thinks if any decision did go our way or against Tottenham, or vice-versa, then questions would be asked and they don't want to be put in that situation.

"My take on it is that the integrity of the referees should stop that happening or anybody having any doubts about that anyway, but it is what it is."

Have you added the new Top Story alerts in the BBC Sport app? Simply head to the menu in the app - and don't forget you can also add score alerts your football team and more.