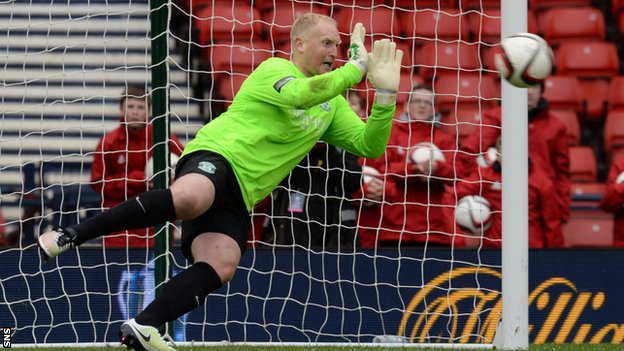 Conrad Logan was pleased for those who had supported him during a lengthy injury absence after helping Hibernian reach the Scottish Cup final.

Logan, 30, made his Hibs debut in Saturday's semi-final against Dundee United - his first game in 16 months.

And the Irishman saved two penalties to give Alan Stubbs' side a 4-2 shootout win after a scoreless 120 minutes.

"I feel proud and happy for friends and family that have stuck by me in this time," he said.

"There was a lot of messages and phone calls and everyone's just happy and proud obviously because of my injury and being out for so long. They're just all excited and happy.

"They know it's been a tough time over the 15, 16 months when you're out injured and nothing's really happening so it's nice for them as well."

'Brought back down to earth'

However, one conversation ensured the keeper did not get carried away.

"It was a dream debut at the time but I was brought back down to earth quickly when I rang my daughter, who was watching it on telly," Logan told BBC Radio 5 live.

"I said, 'did you watch the game?' and she said, 'I did but why did you dive the wrong way for one of the penalties?'"

Logan joined Hibs earlier this month and only found out he would be facing United shortly before kick-off. He was preferred to Finn Otso Virtanen with first choice Mark Oxley suspended.

"It's great to save a penalty at any stage but in the semi-final of the Scottish Cup in a shootout was something," he explained.

"I think once you save the second one your head just goes and you just want to celebrate with the fans and you hear them cheering and you think: 'This really can happen now.'"

Logan was on the books at Leicester City for 10 years and was on the substitutes' bench with current Foxes favourites Jamie Vardy and Danny Drinkwater as well as Tottenham loanee Harry Kane in the Championship play-off semi-final defeat by Watford in 2013.

"They obviously had potential and they just needed breaks and they obviously weren't playing in those game but the next season they were regulars and they got promoted and all three of them have taken the Premier League by storm," said Logan.

"Probably all three of them will go [to Euro 2016 with England] and possibly be pushing for a start, which they deserve."

Maybe this year for Hibs?

Hibs and Rangers have been familiar foes this season

Hibs will face Rangers in the Scottish Cup final, with the Easter Road side having last won the tournament in 1902.

"I probably didn't quite realise until I came up here exactly what the Scottish Cup meant to the Hibs fans," added Logan.

"It's been a long time. On social media and different forums, it's really hit home just what it's meant to the fans. It's fantastic for them.

"We'll go in slightly as underdogs, which will probably suit us. We actually play Rangers on Wednesday at home in the league. They've had a fantastic season.

"I'm grateful for Alan Stubbs for giving me the opportunity and bringing me up. It was a big call on his part.

"I'd like to think I've repaid him and given him something to think about now hopefully for the remaining games."

The stories on the back pages of today's Scottish newspapers