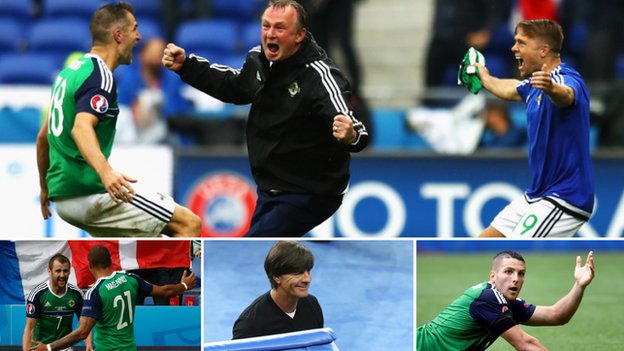 After beating Ukraine, Northern Ireland are looking to stun Germany in Paris on Tuesday

Celtic boss and fellow Northern Irishman Brendan Rodgers was moved to describe him as "talented, bright, a good coach who works with players well and can stimulate a group".

And O'Neill's bold, high-risk decision to make five changes for the Ukraine match was hailed as a tactical masterstroke.

"If it had been Jose Mourinho or Roy Hodgson, he would be hailed as a magician," NI and Kilmarnock forward Josh Magennis reflected afterwards.

But after winning that match 2-0, O'Neill now faces his biggest challenge - plotting the downfall of world champions Germany on Tuesday.

A draw in Paris might be enough for the boys in green, although it is possible NI could progress even if they lose to Germany, as long as results in other groups go their way.

So how should O'Neill play it at the Parc des Princes?

Same again for the boys in green? 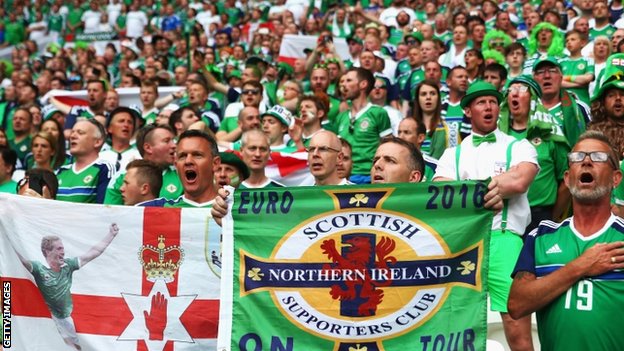 Despite working miracles with a squad containing just five Premier League performers, 46-year-old O'Neill has not been immune to criticism.

His team's policy of containment in the 1-0 defeat by Poland led to suggestions he had been too cautious in Nice.

The manager admitted his unfancied side failed to make a mark in that opening Group C match, and a different approach was anticipated for Thursday's game against Ukraine.

However, no-one expected five changes, or that O'Neill would drop top scorer Kyle Lafferty for a match Northern Ireland had to win.

The players brought in all played vital roles in the Lyon success, and the boss was completely vindicated.

Striker Lafferty will probably be on the bench again, ready to come on should Northern Ireland fall behind.

QPR's Conor Washington deserves to keep his place up front while support man Jamie Ward produced his best performance in 24 appearances in a green shirt on Thursday night.

"Washington's pace made us look much more dynamic. He was excellent at holding the ball up and taking the pressure off the back four," said Hibernian manager Neil Lennon, who captained Northern Ireland and won 40 caps between 1994 and 2002.

"He was aggressive, powerful and full of running, which was a big, big plus, and he got Northern Ireland up the pitch - he won the free-kick which we scored the first goal from - so more of the same would be great. We need that to happen against Germany too."

One change O'Neill may ponder is a recall for experienced Derby County midfielder Chris Baird as an anchorman to play in front of the defensive quartet of Aaron Hughes, Gareth McAuley, Craig Cathcart and Jonny Evans.

Much of Northern Ireland's success is down to a solid defence. They have had five clean sheets in seven matches, and have conceded just one first-half goal in their past 21 games.

Boss O'Neill believes a Germany team beaten by Poland and the Republic of Ireland in qualifying, and recently by Slovakia in a warm-up fixture, have weaknesses to exploit. But the priority has to be keeping things solid at the back.

"We will have to get our organisation absolutely spot on at the back but I am confident that will happen," added Lennon.

"Michael O'Neill is so meticulous with his preparations for every game.

"Defensively over the last couple of years we have been absolutely superb. We have defenders who enjoy defending and are used to being under pressure and not seeing much possession, which is going to happen against Germany. Our usual mentality is ideal for this match.

"What might help is that Germany do not look quite as strong as usual in attack, but they are still very dangerous - they won the last World Cup without a recognised striker."

And Lennon, working for the BBC at the tournament, believes O'Neill will stick with the back four which served him so well against Ukraine.

In the opening fixture, O'Neill went for a back three, plus two wing-backs. But, such was Poland's early dominance, it effectively became an enforced five-man defence.

"Having a four-man defence means we will offer a bit more up front," adds Lennon, who spent most of his club career with Leicester City and Celtic.

"The balance of the team looked far better against Ukraine than it did against Poland.

"We know we are not going to be dominant in possession but it is important we use the ball well when we get it and play in Germany's half as much as we can."

Germany are renowned for working their way into tournament finals. At the last World Cup in 2014 they were held to a 2-2 by Ghana, but went on to be crowned global champions for a fourth time.

"I know they have not set the tournament on fire just yet but you know Germany are always a determined team and they are probably a slow burner at Euro 2016," says Lennon.

"They are going to get better and, without having played fantastically well, they are sitting on four points already."

Coach Joachim Loew, in charge of Germany for 10 years, has predicted his side will not slip up in Paris.

"We want to win, we will win and we will top the group," promised the 56-year-old. "I think we will then play in Lille for our round of 16. I don't know any other way."

Should Loew's team lose, though, it would be Northern Ireland's finest footballing hour, eclipsing that famous 1982 night in Valencia when Billy Bingham's side beat World Cup hosts Spain.

A shop window for NI's players - and the boss 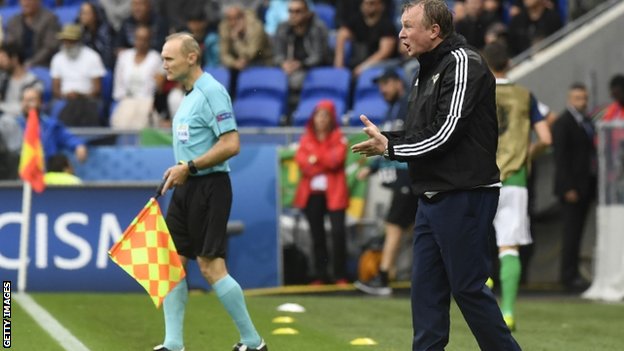 When it comes to taking relatively unknown players to a higher level, the astute O'Neill has form.

Just five years ago, he was manager of Shamrock Rovers when the Dublin club became the first from Ireland to reach the group stages of the Europa League.

Having that on his CV did no harm when O'Neill put his name forward as Nigel Worthington's successor in December 2011.

Northern Ireland's qualification and their win over Ukraine will have placed the manager on the radar of English clubs.

Despite agreeing a four-year contract with O'Neill recently, Irish Football Association chiefs know their manager could well land a new job on the back of this tournament.

And it does not stop there. Some of O'Neill's players could reap rewards with eye-catching displays in France.

Lafferty, an outcast at club level with Norwich but so important in qualifying, will be anxious to get back on the pitch - and for Northern Ireland to qualify for the next stage.

Veteran defender Hughes, 36, is currently without a club, but has made his mark in a surprise but successful recall to the national side.

"Over the years, NI have had plenty of players who probably haven't had great club careers but have been brilliant for their country," observes former Celtic manager Lennon.

"They seem to have a knack of playing brilliantly for their international team - [former Preston and Leeds striker] David Healy is the prime example of that."

And it is not just O'Neill and his players who would benefit from beating the three-time European champions. The Irish FA estimates it would bank £2m with victory and qualification for the last 16.