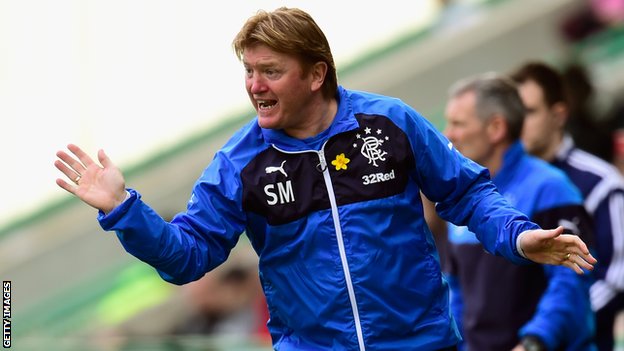 Stuart McCall has been appointed as Bradford City manager for the second time on a two-year deal.

The 52-year-old was previously boss at Valley Parade between 2007 and 2010 and replaces Phil Parkinson, who left for Bolton Wanderers on 9 June.

McCall also had two playing spells with the Bantams, appearing in the Premier League, and had been out of management since a short spell at Rangers in 2015.

Since then, he has been working as a Scotland coach under Gordon Strachan.

Joint-chairman Stefan Rupp told the club website: "Stuart's fondness for Bradford City is evidently deep-rooted. He deserves this opportunity and I know the fans will join me in wishing him every success.

The former Scotland international left Bradford by mutual consent in February 2010 and he moved to Motherwell later that year, leading the Scottish Premiership club to the Champions League for the first time in their history with a third-placed finish in 2012.

The following season he led them to a second-placed finish in 2013 and 2014, before resigning with the club second-from-bottom in November 2014.

McCall was appointed Rangers manager on a short-term contract in March 2015, but could not achieve promotion to the top-flight and Mark Warburton was appointed as the club's full-time manager.

Rupp continued: "Since his first spell as manager of Bradford City, Stuart has gone on to prove his credentials during a very successful spell at Motherwell and in the last couple of years has gained international coaching experience as Gordon Strachan's assistant.

"Whilst we considered a number of high-calibre applicants for the post of manager, we were clearly of the view that Stuart was the best man to take the club forward. We look forward to working with him."