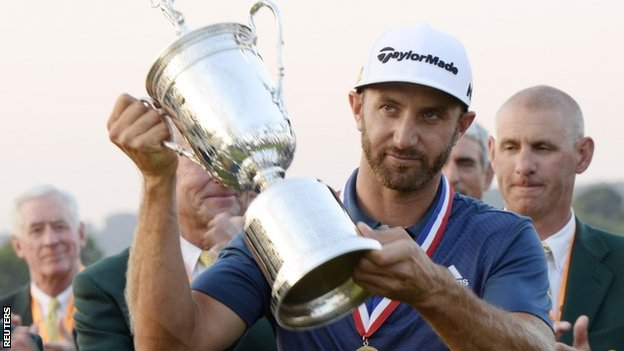 Dustin Johnson has claimed his first major - but only after a farcical end to the US Open that drew criticism from Rory McIlroy and Jordan Spieth.

Johnson played his last seven holes knowing he had to review a possible rules infringement after the round.

He shot 68 to finish five under but was then penalised a shot for making his ball move on the fifth green, despite being initially absolved of wrongdoing.

McIlroy called organisers "amateur" and Spieth said the decision was "a joke".

Johnson's score was amended to four under, but he still finished three strokes ahead of Irishman Shane Lowry and American duo Jim Furyk and Scott Piercy.

Lowry started the final round at Oakmont with a four-shot lead but blew that advantage on the first nine holes.

However, there was confusion over how big a lead Johnson had because nobody knew if he would be penalised.

When Lowry was told, he bogeyed three holes in succession.

England's Lee Westwood, playing alongside Johnson, started the day on two under par but carded a 10-over-par 80 to finish on eight over.

What did Johnson do?

Standing over his ball on the fifth green, he made two practice putts. As he prepared to address the ball to take his putt, it moved slightly.

Johnson stepped away, claiming he had not addressed the ball. He checked with a rules official, who was happy there had been no infringement, and playing partner Lee Westwood also absolved him of blame.

Johnson, US Open runner-up last year who missed out on a play-off at the 2010 US PGA as a result of a rules violation, went on to par the hole.

But another rules official approached Johnson on the 12th tee and, after a discussion, decided they needed to review the footage of the incident after he had completed his round because he could face a one-stroke penalty.

It meant there was some confusion out on the course among players as to how many shots Johnson was in the lead by.

The penalty stroke was eventually upheld and Johnson, whose victory moves him up to world number three, signed for a one-under-par 69.

Johnson claimed he was not affected by the intervention from officials.

"At that point, I just thought I'd deal with it when I'm done," he said. "I tried to block it out and not let it bother me. Who cares, it doesn't matter any more."

The USGA's director of rules Jeff Hall said he had watched video of the incident and decided Johnson's actions "could have caused the ball to move".

Hall added: "The first time we had the opportunity to speak to Dustin was the 12th hole. We asked if there was some other reason the ball could have moved. He didn't state a reason. We decided not to review it with Dustin at the media tent on the 13th hole and instead wait till the end."

But 2011 US Open champion McIlroy and defending champion Spieth were not impressed with how things developed.

McIlroy said Johnson should not have been penalised and suggested he would not have hit another shot until the "farce was rectified" if he had been in the American's situation.

Spieth said the incident should not be overlooked just because Johnson went on to claim a "multiple-shot victory", while Rickie Fowler called the incident "completely ridiculous" and "laughable".

Lowry had held the lead going into the final round but refused to use the confusion surrounding Johnson's penalty as an excuse for his own demise.

He had already bogeyed four holes to drop to three under, two behind Johnson, by the time he learned of the potential penalty.

"It didn't affect me much at all," he insisted.

"I credit Dustin for playing the way he played on the way in, having that hanging over him, because I probably would have wanted to know straight away if it was me. I'm very disappointed. The more I think about it the more upset I'm getting."

Ironically, Lowry called a one-shot penalty on himself during round two when his ball moved after he had addressed it on the putting surface of the 16th hole.

"It's going to be a tough few days," he added. "I led the US Open by four and I was tied for the lead with five holes to play."

What about the rest?

Former world number one Westwood started the day five off the lead.

However, a run of five bogeys and a double bogey in six holes from the second shattered his round and extended his run to 73 majors without a victory.

Westwood had just one birdie, on the par-four 17th, as he recorded a 10-over-par 80 to finish on eight over.

Andrew Landry, the world number 624, who led after round one and stayed in contention all week, finally succumbed to the pressure in round four.

Playing in the final group with Lowry, the American carded an eight-over 78 to finish five over par.

Sergio Garcia threatened again at a major, reaching three under par on the 13th, but a run of three successive bogeys ended his challenge.

Like Westwood, the Spaniard is still searching for a first win in one of golf's four big tournaments.

Furyk's four-under 66 was the lowest round of the day and catapulted the 46-year-old, who won the 2003 title, up to a tie for second with Lowry and Piercy.

Piercy opened with back-to-back birdies to get to two under and picked up another shot on the 12th but closed with bogeys on the 16th and 18th holes.