Australia v England: How Eddie Jones made his side winners again

When Eddie Jones was confirmed as Stuart Lancaster's successor, England were eighth in the world rankings and the team's reputation was in tatters after the devastating group-stage exit from the Rugby World Cup.

There was doubt over the future of Lancaster's assistant coaches Andy Farrell, Graham Rowntree and Mike Catt, while numerous senior players - including the captain at the time, Chris Robshaw - feared they may have played their last match for their country.

But fewer than seven months later, England have won all eight of their matches in 2016, sealed a first Grand Slam since 2003, claimed a first series win in Australia and leapt from eighth to second in the rankings.

How has Jones transformed England so quickly?

Out with the old

Before a ball was kicked in the Six Nations, Jones made some bold decisions. Farrell, Rowntree and Catt were all deemed surplus to requirements as the Australian established his own backroom team.

He incurred the wrath of Bristol by recruiting their new forwards coach Steve Borthwick, while defence guru Paul Gustard joined from Saracens at the end of January.

Both have been influential, with Borthwick building a formidable England set-piece, and Gustard being the mastermind behind the astonishing defensive effort in the series-clinching second Test match in Melbourne. 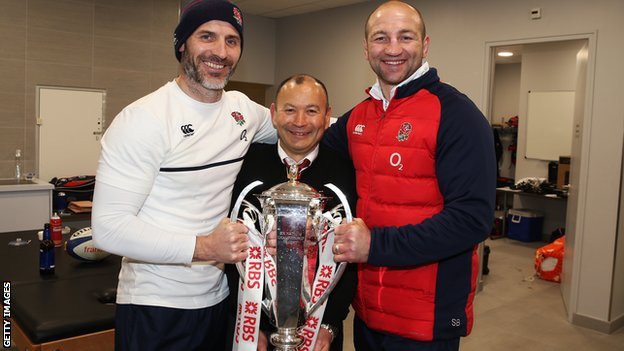 Jones took a similar stance with his choice of captain.

Robshaw had led England for 42 Test matches, but Jones quickly decided a change was needed. Wasps lock Joe Launchbury had many backers, but instead Jones opted for experienced hooker Dylan Hartley.

Given Hartley's chequered disciplinary record - he had been dropped from the World Cup squad following a ban for foul play - it was a brave and controversial call. But Hartley has been a revelation in the role, with his approach perfectly in sync with that of Jones.

"I wanted someone who was going to encompass the attitude we want the team to have," Jones told BBC Sport in January. "He is combative and abrasive, and I think he is the sort of guy who can lead England forward."

Jones' choice of Hartley as skipper set the tone for what he wanted from his England side - attitude.

While Lancaster went to lengths not to engage in media mind games or to have his players come across as arrogant, England have now been talking the talk before walking the walk, with Jones and Hartley both bullishly stating England "expected" to win the series in Australia.

Before boarding the plane down under, Jones compared his side's approach to that of the highly-controversial 'Bodyline' Ashes of the 1930s, when England prevailed using tactics so aggressive they were deemed controversial.

So clever has Jones been with his use of the media compared to counterpart Michael Cheika, New Zealand coach Steve Hansen says it has affected the outcome of the series. 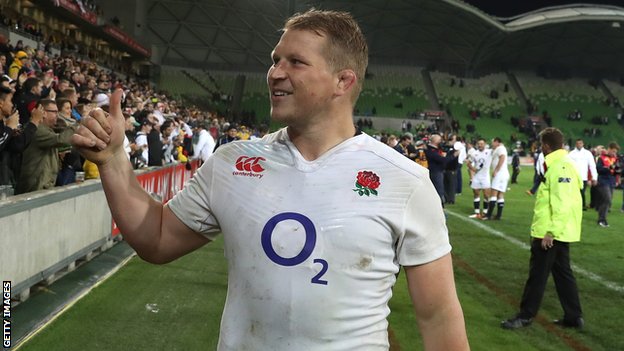 On the rare occasion he did rise to Jones' bait, Cheika spoke of England's "niggle" between the first and second Tests, suggesting the tourists were using cynical off-the-ball tactics.

"Niggle isn't something we practice," Hartley said in response. "We practice being physical, confrontational. We want to dominate. If that's the way we are being perceived, that's a compliment."

It was instructive that within minutes of sealing the series, the captain and coach were both stressing the need to finish the job and complete a series whitewash in Sydney.

Quite simply, under Jones and Hartley, winning is all that matters.

After being relieved of the captaincy, it would have been easy for Jones to dispense with Robshaw as a player as well, but the Harlequins forward was retained in the Elite Player Squad, with the only change being a positional switch from openside to blindside flanker.

Robshaw has since been in the form of his life in a white shirt, marking his 50th cap with a man-of-the-match display at AAMI Park.

"He was absolutely outstanding. Everyone in the team was so happy he got his 50th cap, and he capped it off with maybe his best game for England," Jones said.

James Haskell is another player to have been given a new lease of life with England this year, while the likes of Billy Vunipola and George Ford have also flourished under Jones' 'carrot and stick' management style.

Bath fly-half Ford has endured a mixed season for club and country, but after being repeatedly backed in public by Jones he played flawlessly in the series-clinching second Test victory.

"To have someone who backs his players and supports his players is brilliant, and you try and repay that with the way you play," Ford told BBC Sport.

"He doesn't only do that, he challenges you in training, he's honest with you in one-to-one meetings, and that's what you want as a player."

By tinkering with his side throughout the Six Nations - and doing likewise with his bench before the second Test - Jones has kept the wider squad engaged and hungry.

Third-choice hooker Jamie George could have, for example, spent three weeks holding tackle bags in Australia; instead he made a telling contribution off the bench in Melbourne.

Jones was the coach of Australia when England won the World Cup in 2003, with Martin Johnson and Lawrence Dallaglio spearheading an uncompromising pack of English forwards.

Perhaps influenced by this, Jones has repeatedly stressed the need to build a dominant pack as a basis from which England can develop.

This emphasis on forward play - augmented by the line-out coaching of Borthwick and scrum input from Neil Hatley - saw England outmuscle Australia, with the same pack starting both Test matches as well as the Grand Slam decider against France in Paris.

Of the starting XV that won in Melbourne, 14 featured under Lancaster, showing that Jones has hardly ripped up the script in terms of selection. 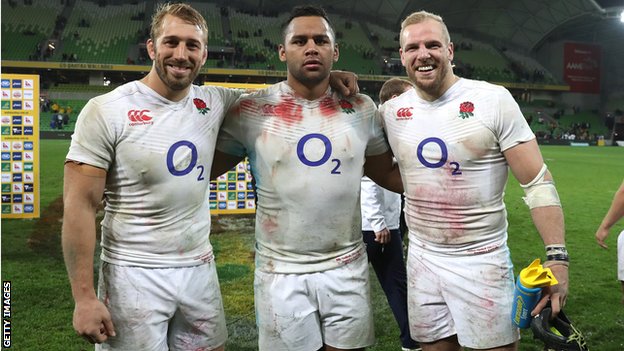 He has, however, brought clarity to the gameplan.

England arguably had a more attractive attacking game under Lancaster, but in the final year of his reign confusion over selection and tactics crept in.

Jones has kept it simple, playing a territory-based game by combining a solid set-piece and a strong kicking game aided by the selection of two playmakers - Owen Farrell and George Ford - in midfield.

At the same time, Farrell has cemented his status as the best goal-kicker in world rugby.

"Sometimes in rugby you are better off without the ball," Ford said after the backs-to-the-walls win in Melbourne. "We came into the game with a plan and we stuck to it for the full 80 minutes."

The one man fresh to the set-up - the irrepressible 21-year-old Saracen Maro Itoje - has made a seismic impact.

Lancaster's reasons for leaving Itoje out of the World Cup squad were sound - the player had barely broken into Saracens' first-team - but in hindsight, who is to say he would not have risen to the challenge?

Things have certainly gone England and Jones' way in 2016. While Lancaster suffered some bad luck with injuries during his time in charge, Jones has largely had a fully-fit squad from which to select.

The only significant absentee has been centre Manu Tuilagi, but in his prolonged absence the Ford-Farrell combination has thrived. 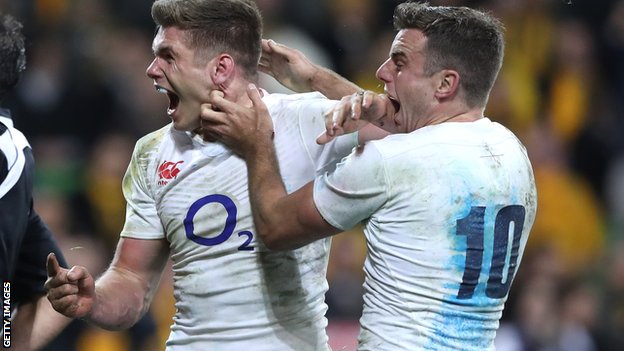 Jones has also been helped by the form of England's club sides this year, with double-champions Saracens providing a core of players with a hardened winning mentality. The Vunipola brothers, George Kruis, Itoje and Farrell are unaccustomed to losing rugby matches.

Australian supporters would also argue Jones and his side were on the right side of the officiating in both Test matches.

They may have a point, but how often was this said of Richie McCaw and New Zealand? It's no coincidence the best sides in the world also seem to get the rub of the green.

Jones acknowledges England have a long way to go to rival the All Blacks, but he is unashamed in his plan to make that happen. And according to the former Japan coach, that route to the top starts with a series whitewash in Sydney.

"To be the best in the world you have to be absolutely ruthless," Jones says. "We are not going to be satisfied unless we win 3-0." 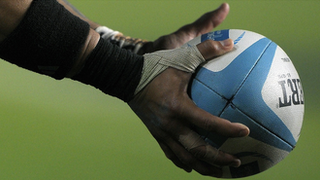 Find out how to get into rugby union with our special guide .

Subscribe to the BBC Sport newsletter to get our pick of news, features and video sent to your inbox.

More from Sport and Rugby Union